Episcopal priest Robert Capon said: “We are in a war between dullness and astonishment.” The most critical issue facing Christians is not abortion, pornography, the disintegration of the family, moral absolutes, MTV, drugs, racism, sexuality or school prayer. The critical issue today is dullness. We have lost our astonishment. The Good News is no longer good new, it is okay news. Christianity is no longer life changing, it is life enhancing, Jesus doesn’t change people into wild-eyed radicals anymore, He changes them into “nice people.” If Christianity is simply about being nice, I’m not interested. What happened to radical Christianity, the un-nice brand of Christianity that turned the world upside-down?

What happened to the kind of Christians who were filled with passion and gratitude, and who every day were unable to get over the grace of God? ~ Michael Yaconelli 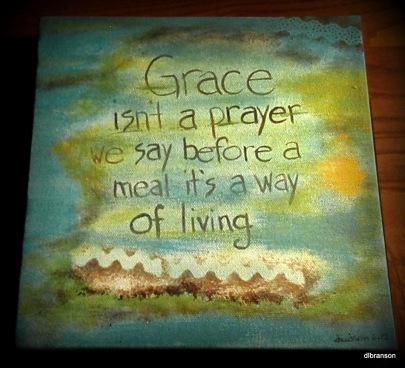 What has happened, Michael? I think we’ve gotten side-tracked. We’ve become a people more passionate about our causes than our Creator. And that has turned us into a very dull lot. Loud, but dull.

As something becomes dull, it begins to lose its light and luster. I think we’ve lost our light, not because we’re passionless but because of what we’re passionate about. We picket and protest and proselytize on the side but we are so over grace. Grace is left for the Mother Teresa’s and a quick pre-meal prayer.

I don’t think it’s possible for me to be filled with passion for the Father, gratitude for His Son, overwhelmed by the grace of His Spirit and live a life of just okay news.

When I opened the package and saw this sweet gift, painted by my friend, I smiled. I smile every time I see it and I see it all the time because it’s hanging right by the door. It’s a reminder to me, all day every day, not to leave home without it.

Grace isn’t just another name for thank-you for this food, it’s a way of living. And it’s never dull.

A former counselor and public speaker, I'm grateful for many, many things - God's grace most of all! View all posts by Debbie

50 thoughts on “Grace: It Isn’t Just For Breakfast Anymore”